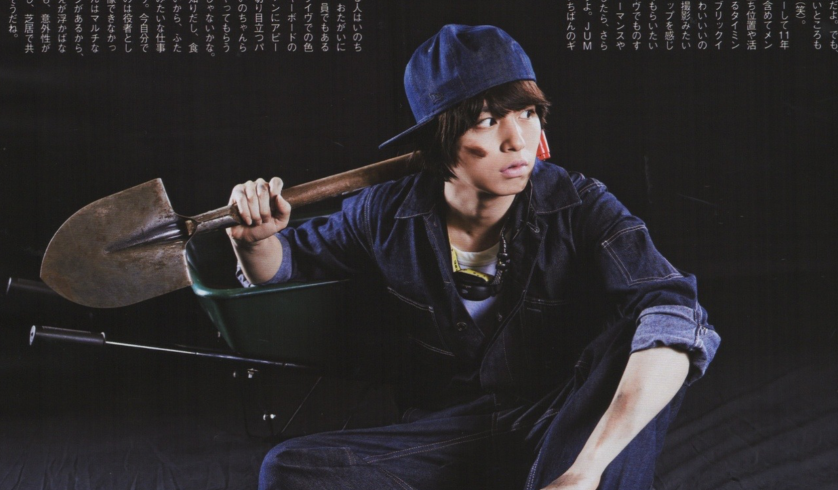 From Yuto → To Kei

This time I produced Ino-chan, the theme I thought of from the very beginning was “We’ll go for something manly!”. I think the image that people have of Inoo Kei is “androgynously cute”. So, I thought I wanted to show “Inoo-chan’s full manliness”. There are many different types of “manliness” but, my image isn’t of a cool or even a sexy manliness. It’s a dripping with sweat, hard working, wild kind of manliness.

If you had to name a solid visual, then it’s a coal miner right. Holding a pick axe or a shovel in his hand, his sweat smeared face dirty with mud and soot. A man that has worked all day taking a break from loading and moving the carts of coal… I saw the image of that manly Inoo Kei in an instant (lol). So the theme is “The stench of a man = unrefined”.

This concept is the complete opposite of his normal image, because people have this idea of Inoo being unexpected because of his erratic confidence. He likes thinking about all kinds of things, so because he has his own individual view of the world, rather than going with a normal theme, I thought I’d show Ino-chan’s hidden charms.

Speaking of unexpected ideas, lately Ino-chan came up with a unique idea. When the two of us were together during our free time at work, I said “Want to go and get ramen before we go to our next job?”. So then he said “Since there’s a supermarket, let’s buy the ingredients and have yakiniku at my place” and invited me over. If it were a normal person, they’d go with ramen, or walk around looking for another delicious looking restaurant. But, I thought saying “Let’s buy ingredients together and eat at my place” was very Ino-chan-like, I was totally impressed by his ability to act on his decision.

Talking about something different for his expression I said “At this time, in this moment you’re a person that’s going to have some fun”.

Me and Ino-chan have been together ever since the J.J.Express era in 2004. We never tried to find out stuff about each other but, I feel like Ino-chan was always watching over me as I grew like “That tiny Yuto….”. For me, Yabu-kun is like a big brother but, Ino-chan is… he feels kinda like a relative I guess.

If I compared him to the Ino-chan he was at the time of our debut then, his hairstyle is completely different to how it used to be, and I think he’s grown up and changed a lot. Especially, his “awareness of being seen by people” I think. Including the hair, he’s developed a strong aesthetic sense, because I started to notice him saying things like “I wonder how I look to other people”. When he started to appear on “Mezamashi TV” society called it the “Inoo Revolution”, so I think that having everything suddenly exposed like that changed this interest.

If we’re talking about Ino-chan’s personal charm, then as you’d expect it’s his “androgynous-ness”. But, the charms that I see are more than just this. He always has his own ideas, he properly watches the things around him and has the power to “respond according needs”, and on top of that he’s a person who can enjoy himself.

Because JUMP has so many members, it’s difficult timing when you’re going to say something during the MC. But for Ino-chan who is properly watching what’s going on around him, when he adds something to the talk a the “perfect moment” we laugh, he can notice things that the members don’t too, his view of situations is really on point. He’s a science person but, he’s a clever person who can logically think about everything. This unseen part of him is also one of his charms though (lol).

JUMP are also entering their 11th year, all the members, me included, are thinking about our position and activities. For Ino-chan whose public image is androgynously cute, I think I want him to get more jobs like today’s photo shoot that will lets the fans feel this gap. For example, doing an incredibly manly performance in a concert, or a dance, or singing, if he does that I think that his charms will increase even more. Because in JUMP I think Ino-chan is the one who can make the most use of this gap. We’re also both members of the JUMP band but, I think it would be interesting to do an “Ino-like idea” for this too. Changing up the colour of the band in the concerts, like the position of the keyboard so he can appeal to the fans with the way he moves his hands, doing his best to stand out in the performance.

Ino-chan is a knowledgeable person, because he knows a lot about food, I think it would be fun if the two of us did a gourmet tour kind of job together. Even I can’t picture co-starring with this kind of unexpected feeling actor. Because Ino-chan has a multi-talented image, he’s never thought about specialising in acting I guess. But, I think it would be interesting  if I ever did co-star with this unpredictable Ino-chan.