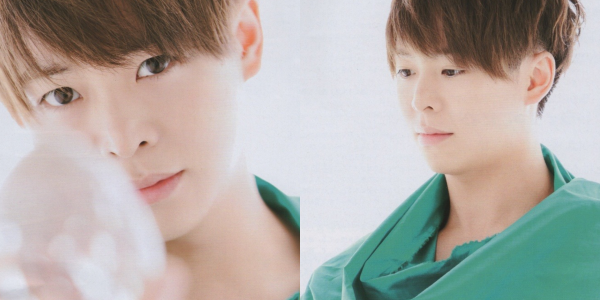 From Kei → To Daiki

This time, the thing I thought of for producing Dai-chan’s photo shoot was “Turkey” and “Birth”. “Why Turkey?” you ask, because it’s the country that I long to go and visit. Two years ago I did an article for an architecture magazine, and I went to a place called the “Galleria” that was a car sales yard and house together. The house’s bathroom had this really beautiful, blue tiling, it’s was made of turquoise. I will never forget how I felt at that time, “If it was Dai-chan, would he make an expression filled with emotion like me?” was my expectation, and it’s the basic concept for this shoot.

In a bright white space, wearing just three turquoise blue sheets, Dai-chan is holding a strange, jagged rock in the palm of his hand. It’s said that when Christ was born he was holding a stone… That’s a lie though (lol). But, that stone signifies the birth of life. I thought I want him so show an expression like “It’s born” from the influence of that stone. But, the actual photo shoot is a little different, we organised a natural rock but, because it ended up as an artificial glass gem, it totally moved away from the original concept so I’m a bit disappointed (lol).

But the Dai-chan we came out with looks like the God of the Sea “Poseidon” so, maybe I can forgive them. If he raises his right hand the seas will part, and if he makes his left hand into a fist and raises it thunder clouds boom… Because he’s that kind of person. What I mean is, maybe Dai-chan will become a superhuman (lol).

Why do I think this? About two years ago when we went to the sea for work, if Dai-chan suddenly raised his hand the surface of the water would split perfectly in two and you could see the sea floor. Like in the last scene of the latest “Pirates of the Caribbean” movie. He did that kind of thing, he did (lol).

If I think back, maybe Dai-chan had a glimpse of Poseidon in him the first time we met too. When we were about Middle School age, people would put “don!” on the end of their sentences. For example, “I’m so hungry don!” or “It’s time to go to work, I’ll do my best don!”. Maybe I’m remembering this now because of the “don” on the end of “Poseidon”. But that’s obviously not what I’m meant to be talking about now (lol).

I have a lot of memories of Dai-chan. Too many. But, because they are all precious memories, I want to keep them secretly tucked away in a “treasure chest” inside me. If you accidentally open the treasure chest, it feels like the beautiful memories will also disappear somewhere. But, if we’re talking about recent memories… the other day, when I was talking to Dai-chan, he said something really impressive. I asked Dai-chan “Have you seen The Greatest Showman?” and he said “I haven’t”. It was an abrupt response. Coz, I thought “Dai-chan HASN’T seen such a big movie”. Right now, that was the cherished episode that I have with Dai-chan that I thought I wanted to tell you all, that’s about it I guess (lol).

Dai-chan’s charm, I wonder if I can put it into words. I have quite a way with words so, if I talk about his charms, I’m worried that a lot of people will end up stuck with this as their image of Dai-chan (lol).

But, Dai-chan’s public image is sexy. Coz, his facial expressions when he’s performing, and the way he moves his body when he’s dancing are really sexy. But, my personal image of him is a little different. Because to me he is “still like a cute kid”. I wonder if my impression is the opposite of what society sees?

When I try thinking about “Why is Dai-chan still like a cute kid even now?”, maybe it’s because he didn’t have a normal, everyday boyhood. Because ever since he was little he has been surrounded by adults while doing this kind of work. Since he was a boy he’s had no choice but to act like an adult so, now he’s this age perhaps he has revealed his childlike side to me. This Dai-chan, he’s really cute (lol).

From now on, so that I can appeal Dai-chan’s charms to society, I thought that I’d go back to zero just once. That’s the kind of thought I had for this project. In other words, “Going back to zero = rebirth”. In our work, due to our public image, and the things we accumulate to express ourselves, we get more and more tied down by stereotypes. So, it all started from the thought “I want to see the expression of a Dai-chan who has forgotten everything and gone back to zero”, this project did.

In the future, I want to see Dai-chan in his finest clothes as he makes his way onto Broadway. “Why Broadway in America?” you ask, in the beginning Gods of the Sea called Poseidon dive into the land of Japan so, I want to see him giving his all outside this region. So, I think it’s right that our expectations of Poseidon Arioka from now on are “Don’t change”. Because he wasn’t reborn through this project, I want him to be the same old Dai-chan (lol).

Finally, to summarise everything, the parts of Dai-chan and I that are similar, I don’t think we have anything in common. Our characters are completely different. Because Dai-chan is honest he’s an emotional person but, if I have to say it then, I’m the kind of person that thinks about things a lot before speaking. What I mean is, Dai-chan can deal more with comedy, he has a wealth of things to say and do on variety shows and he has a talent for telling jokes. I’m the complete opposite. I think about things logically, and what makes it worse is I’m a person that can’t tell a lie (lol).