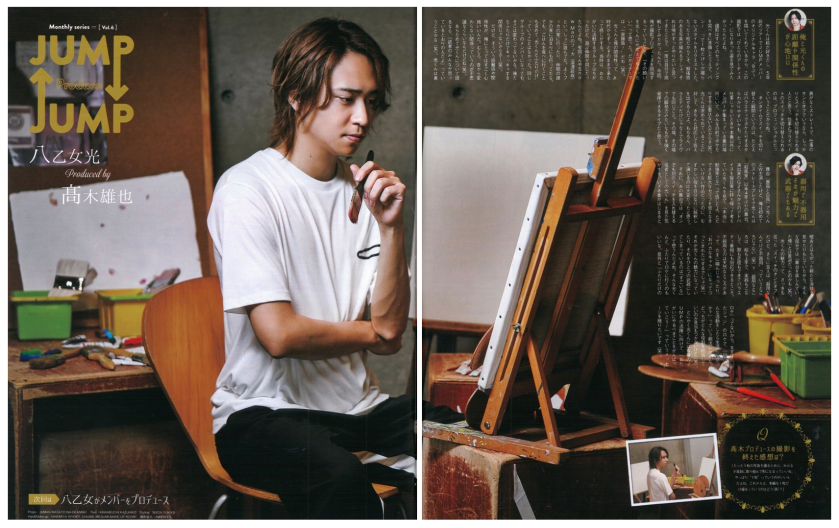 From Yuya → To Hikaru

Hikaru-kun likes pictures, and because he drew JUMP’s original characters, the “KyuPuu” for us in the tour 5 years ago, I wanted to see him become a “lone artist” figure.

From perfectly preparing the setting of the shoot, I requested to take the photo in a “bam” just one shot kind of style. Because if there is only a single shot, you’ll take a photo with an anxious feeling to it. I’ve always said I wanted to try this so, I wanted to challenge it myself this once. This time, I was the one in charge of producing the shoot so, I thought “I want Hikaru-kun to grant my wish”. So the theme is “Make or Break!” (lol).

Hikaru and my relationship, I feel like we’ve been this way ever since we were Juniors. At the time, we were working in different groups but, the friends we played with were the same. We played with Arioka-kun and Snowman’s Fukka (Fukazawa Tatsuya). We often went to Fukka’s house and we’d have sleep-overs at any of our friend’s houses. But, as for going out to eat I haven’t been with “just me and Hikaru”. Even though we became members of the same group, this won’t change I guess. Because the two of us don’t have a relationship where we carry on about things together~ (lol).

But, that kind of distance or relationship, I find it really comfortable. Or rather, having that kind of relationship that hasn’t changed since so long ago is like some kind of miracle (lol). If I have to talk about Hikaru-kun again, then he’s “a person who is exactly how the readers think of him” I guess (lol). Hikaru-kun is straight and not two-faced so, if we’re talking about his on and off faces at work, I think he’s a person who can switch on and off properly. Because being able to change between your work and private switches is part of being a professional.

Maybe it’s easy to tell the moment that he switches into on mode, for example when he’s being stupid on a variety show. Because when he’s not at work or when the members are gathered behind the scenes, he doesn’t need to play the fool in front of us (lol). As for what is requested of Hikaru-kun, he’s a person who deals with things properly to solve a problem. Of course, this isn’t just in variety shows, it’s the same for concerts too. In these instances, I think he’s the type that can fully show off something like his full strength.

I had the double lead role with Hikaru-kun in “The Rose and the Swan” play but, this was my first play and Hikaru-kun’s first play after “Sappukei” 4 years ago.  Watching Hikaru-kun take home the advice he was given by the director, G2-san, every day and think about it, I felt that “He’s a diligent student”.  Even though it’s already difficult having to remember such an enormous amount of lines, I think interpreting the difficult role in your own way and performing is hard. So, I feel like in this play I saw “Actor Hikaru-kun flick a different on switch”. Now we’ve started the real performances, so we can show a new performance different to the rehearsals. Doing this is the complete opposite like maybe “I had fun in the play” (lol).

Hikaru-kun’s charm, I said before “his ability to switch on and off” but, if it’s something else then, isn’t it his “skilled yet clumsy” part (lol)? His skills are drawing well, being good at playing instruments, he can sing and act and he can interact on variety shows. His not-so-skilled parts are his airhead moments, and sometimes he messes up what he’s saying, he’s developing a  “stupid character” and he gets teased (lol). This is becoming his charm and he’s made it his weapon, I think it’s amazing.  It would be nice if I could do a location filming with this Hikaru-kun. Because we surprisingly haven’t had a location filming with only us two. To start with, maybe we can do an “Itajan” location like “Is doing things in the morning good for your daily life?” where we report on morning activities. I have no idea who will take charge of what though (lol).

From now on Hikaru-kun will work hard for JUMP, I want to give him this message “Let’s both do our best to do what we do!” (lol).