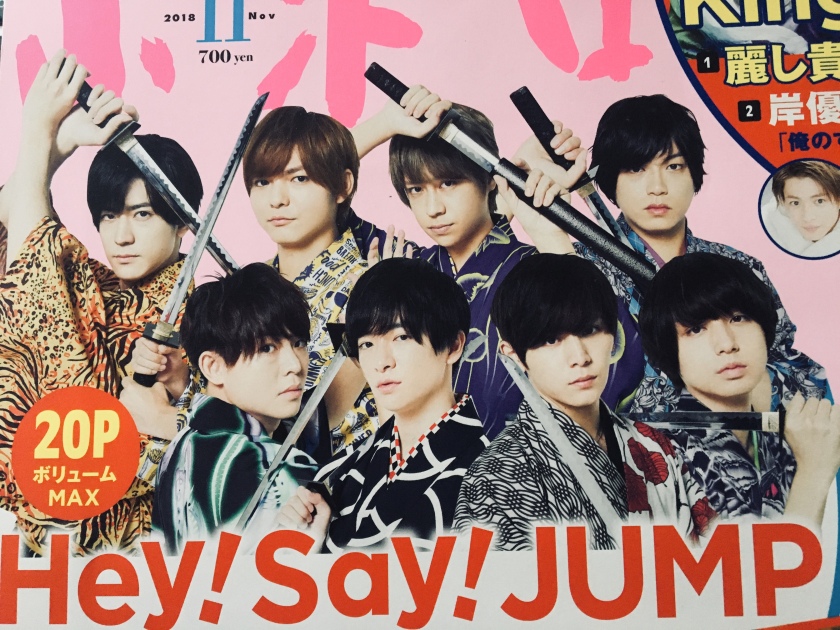 Yaotome Yuya and I did the play together, it’s was his first play and I was happy when he told me “I like doing plays now”.

Nakajima That’s great~. Your play. It was funny that your personalities we so different.

Yaotome I thought it again too, that I love doing plays.

Yamada It’s a nice thing. This year I’ve started to listen to music from overseas artists a lot. Long ago, Hikaru-kun and Dai-chan would listen to Eminem but, this is my first Western music.

Yaotome I remember him (lol)

Nakajima My awareness of English has changed too. Being taught by Keito, I thought that it’s important to be connected to other countries.

Yaotome That’s what I think. It’s better if you can speak English.

Yamada But, I can’t speak English.

Nakajima Yama is our Korean representative.

Yamada Then who’s our Japanese representative? I kinda want to say “Hikaru-kun!” but…?

Yaotome You said it at the exact same time (lol).

Yamada Making our way through this year’s concert, has changed the way I look at dancing. We’re at full power just from the rehearsal stage!

Yaotome Saying that, we haven’t really done it much until now.

Yamada Until now, we seem to have been doing things each at our own pace. For this concert everyone was able to come together, that part has changed overwhelmingly.

Nakajima Watching last year’s concert DVD like “Our dancing, it’s all over the place?” it felt like things were getting dire.

Yaotome Yeah. So we with our heightened awareness, everyone has become the dancer kind, in their solos too.

Nakajima Doing our solo’s too, is our one determination.

Yaotome It’s not like “Let’s all be best buddies and do it together~”, it’s like it’s taken over us all individually, and maybe the change in our music and concerts has made us more mature.

Nakajima That is, I think it’s the challenge of our 11th year. Ah~ On tour this time, I wonder if I’ll be ok…

Yamada Because Yutti is busy with his drama filming.

Nakajima Because even in rehearsals everyone is saying “There isn’t enough time”. Yama and Chinen practiced along with me, it really helped me out!

Yamada We help each other in our times of need. I think everyone feels this way but, since there’s a lot of choreography this time our necks are on the line!

Yaotome Even though we were the ones that decided on the set list, it’s like we’ve dug our own graves (lol). But Hey! Say! JUMP won’t change if we don’t overcome this.

Yamada We set our goal high, and to achieve that is our job. Let’s give our best performance!

We made a futsal team but, when I heard the team name from Captain Yabu I laughed. It was like “The Yabucchi F.C.” (lol)! Without realising I thought “It’s cute~”.

When I went out on my veranda there was a cicada lying dead on its back! It was a little sad like “He lived a good life”, then when I went outside again a few hours later he was gone! He’d come back to life, that guy (lol).

On the final night of “The Rose and the Swan” play Yuya was bawling his eyes out and it made me feel like I was going to start crying along with him. Because we’d given it our all together in rehearsals, and we saw each other trying to liven up the company in the leading roles.

Arioka From rushing into our 10 Year Anniversary last year up until today, it’s like it’s all gone by in the blink of an eye.

Inoo Everyone listened to the “SENSE or LOVE” album for us this Summer but, since it doesn’t feel like our work as a group hasn’t finished growing yet, it’s been that way since.

Arioka The JUMP from now on, because we’ll make this year’s live tour a success…  That’s the way things have become.

Chinen Because the experience of this year’s concert, and the way that the fans feel about it are also important.

Arioka We want to show them the shape of the new JUMP! We’ll do our best so that they don’t feel like it’s been scaled down now that we have 8 members.

Chinen Still, I can’t get used to having an even number of members (lol).

Inoo Even if we’re are able to show you things in different ways as a group, we’d be happy if you could catch hold of this new shape for us.

Arioka The group and the members’ awareness has never changed.

Inoo Yeah, of course it’s been the same the whole time!

Chinen Now all of the members think the same.

Arioka In the “Cooler than before, we want to show a cool dance performance” thought.

Arioka We’ve worked for 10 years and were able to create a kind of “JUMP image or stereotype” I think. But, we’re not satisfied with that shape, and more over we can’t have the attitude to try new things.

Inoo But, because we spent 10 years as JUMP we built that “Shape of JUMP”. It’s requested of us, it’s important to show something fitting of that shape too. To demolish everything we’ve accumulated over the last 10 years…

Arioka Huh? Who said anything about demolishing it (lol)?

Chinen But like, maybe there are surprising parts that people in society don’t know about us from their “View of JUMP”. From understanding this, and using it as a strategy in taking on new challenges, it will lead to work for JUMP from the last 10 years to the 11th year, and from then on.

Inoo Chinen summed it up for me.

Arioka What Chinen said, is something that we always have to think about, so that we can move forwards.

Inoo Since we’re “Hey! Say! JUMP” we have an image linked to the “Heisei Era”. The trace of our footprints are in Heisei, we’re a legacy of Heisei. In the future we will have to use the “Hey! Say!” in English and become a group with an international appeal (lol).

Arioka Legacy (lol). But, I want to set our sights on spreading our wings.

I went to observe the “NHK” gymnastics at the hall. In this amazing atmosphere I was moved when Uchimura Kohei came from behind to take the win. The moment he nailed the perfect landing, even I was so surprised that my whole body broke out in goose bumps.

The blind dancer from “24 Hour TV” Akimoto Mihiro-chan can to see one of our shows, and she said “I love JUMP”. I realised again that the things that we do can make anyone feel great.

The other day I went on a location shoot at Tsukiji Hongan Temple, from a distance there were these people pushing a shopping trolley with a robot in it. When I was staring at them thinking “What weird people there are”, I saw it was Io-san from “Zun” (lol)! (t/n: some comedian)

Yabu It felt like announcing our album in August was an attack. Because we were declaring that we would be a group that was “like this from now on”.

Takaki Uh huh. Since we’re continuing to work into our 11th year, but the fundamentals don’t change. I think it’s our interest in those kinds of things that has changed quite a bit.

Yabu Our member Keito went alone to New York and that has been a big change too. But it doesn’t feel real yet.

Takaki Uh huh. Maybe after we start the concert tour we’ll start to be like “huh?”. But, we have a lot to discuss before we get to that stage.

Takaki That’s it. Of course, all of the members have their feelings.

Yabu Keito made his choice and he chose “Study Abroad” but, I thought “If it was me what should I have chosen?”.

Takaki It’s easy to see how the group has changed. So, everyone around us is looking at us too like “Now that there’s 8 of you, what are you going to do?”.

Yabu We’ll turn this into a positive, because we have this power.  So, we have to do our best.

Takaki We have to do it!

Yabu Once the tour starts, I wonder what the response will be!

Takaki This is how it was for the group and for myself but, when we surpassed out 10th year and started the 11th, I really felt that I wanted to develop my skills more.

Yabu Uh huh. We even tried challenging solo songs on the album too. That was also something that we decided on.

Takaki Of course we have to sing the whole thing on our own, and listening to our own voices in this way is something we had never done before. And so that also became an issue we could see. We overcame that issue on our own, thinking “It’s best to do it for the sake of the group”.

Yabu Because it’s all linked.

Takaki Rather than thinking “for the sake of the group”, maybe the feeling of “ourselves” is stronger now.

Yabu Last year a lot of people congratulated us on our 10 Year Anniversary and got us all fired up but, it has to be us that brings this in the 11th year.

Takaki The Hey! Say! JUMP that say “We want to show you”, we have properly consolidated this feeling into this year’s concert too.

Yabu That is “now”, not next year. From now on, I think it would be great if you could watch over us as we change.

I sent thank-yous to the official guests that came to see the play but… I forgot to put stamps on them and I felt like I was going to cry (lol). Even though I wanted to thank them, they ended up having to pay for the postage~ (sweats).

This year we’ve had typhoons and concentrated areas of rain fall, the weather is really strange. One day when there was heavy rain and lightning, a bolt of lightning struck about 5 metres in front of my house! It scared me way too much (lol).